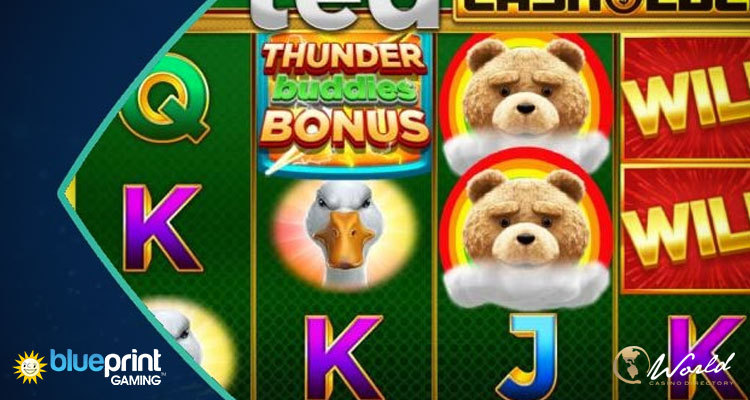 Blueprint Gaming, a popular casino software developer and gaming content provider, has released a new slot from the blockbuster Ted series, ted™ Cash Lock, to bring the latest adventures of the repulsive yet puffy bear driving players ecstatic or crazy, but never indifferent.

Ted is the original slot of Blueprint Gaming based on the obnoxious bear character from the popular 2012 movie. Its ill-behaved and foul-mouthed protagonist has instantly become extremely popular, and the slot has been a blockbuster ever since, producing a series of Ted-featured versions that invite players to join the disgusting bear in its mean adventures.

The latest version, ted™ Cash Lock, released on December 1, follows the established routine: it may lack manners, but it does not lack excitement and fun. Its updated features bring a new experience, with Ted’s unmistakable sense of humor taking it even higher.

When the symbols like Psychedelic ted™ or Psychedelic Rainbow Ted are landed during the base game, the Free Spins bonus is triggered. The amount of Rainbow Ted symbols needed to activate Free Spins can be reduced with activating the side bet at a cost of 0.25xbet.

Each symbol may also add a special Cash Lock™ border to the reel position to multiply their value for the Super Cash Lock™ feature, which is activated once free spins have been completed.

Every reel symbol with a special Cash Lock™ border is replaced by a special ted™ prize-awarding symbol. When Free Spins are triggered, players can win an instant Cashpot or three upgraded Super High Free Spins where every Cash Lock™ symbol landed is guaranteed to be gold.

The slot has medium/high volatility and extensive language support.

Jo Purvis, Director of Key Accounts and Marketing UK at Blueprint Gaming, commented: “We’re thrilled to have been working on another entry into the hugely popular ted™ franchise and we’ve introduced several new features for fans of the obnoxious bear to have fun with.”

As expected, the software developer paid special attention to the slot features. Purvis confirmed: “We’ve packed a lot into ted™ Cash Lock – it promises to be a comedic playing experience with some serious win potential – we’re sure it’s going to be a hit among players across the board.”

The Blueprint Gaming franchise has already proven a success. The latest slot from the series, ted™ Cash Lock, will likely keep the reels turning to the future.