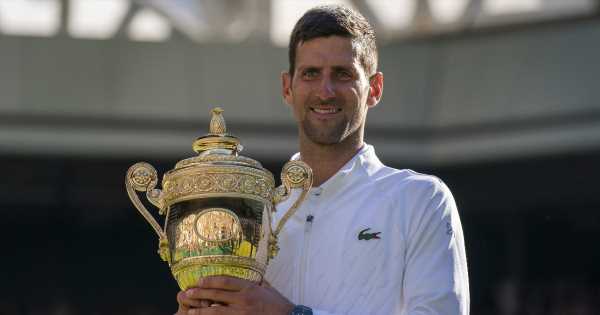 Novak Djokovic is back in Australia.

Nearly a year since he was not allowed to play in the Australian Open and deported because of his stance against the COVID-19 vaccination, Djokovic is scheduled to begin tennis prep for this year’s opening major in Adelaide for the Adelaide International 1.

Just over a month ago, Djokovic had his three-year ban from entering Australia overturned by national officials.

Australian Open tournament director Craig Tiley told the press on Tuesday that Djokovic had arrived in the country and started preparing for the Adelaide event.

“Novak is welcome in Australia,” Tiley said. “I think as we speak he has landed in Adelaide and he’s going to be the player to beat (at the Australian Open) again.”

Djokovic has a record nine Australian Open titles and 21 Grand Slams overall. But he fell behind Rafael Nadal in the chase for most championships by not being allowed to play in 2022 in Australia and New York for the U.S. Open because of COVID-19 restrictions.

Djokovic captured just one major when he was victorious at Wimbledon and fell short to Nadal in the quarterfinals of the French Open.

Meanwhile, Nadal was victorious at the Australian Open and French to give him 22 Grand Slams.

Djokovic was deported from Australia in January 2022 when former immigration minister Alex Hawke deemed the Serbian posed a public health risk to the country’s vaccination mandate. Hawke deporting Djokovic originally meant the tennis star would be banned from the country for three years before the restriction was lifted.

Similar to nearly every hardcourt or grass surface tournament he enters, Djokovic is the betting favorite for this year’s Australian Open.

He’s currently +110 at FanDuel Sportsbook and is also the favorite at DraftKings Sportsbook (+115).

His dominance in Australia is unmatched. Djokovic’s nine Australian Open titles are three more than the next highest total, with Roy Emerson and Roger Federer each winning the major six times.

But what may be most impressive about Djokovic’s success in Australia is his current 29-match win streak. He hasn’t lost in the country since losing to South Korea’s Chung Hyeon in the fourth round of the 2018 Open. Overall, he’s won 47 of his last 49 matches and 72 of his last 75 in Australia.

“I always ask the best from myself so let’s see,” Djokovic told reporters about returning to Australia Friday in Dubai. “Over the years, I’ve been really fortunate to start very strong in Australia and I love playing there. After obviously what happened earlier this year, hopefully, I can have a decent reception there and hopefully, that can help me play some good tennis.”