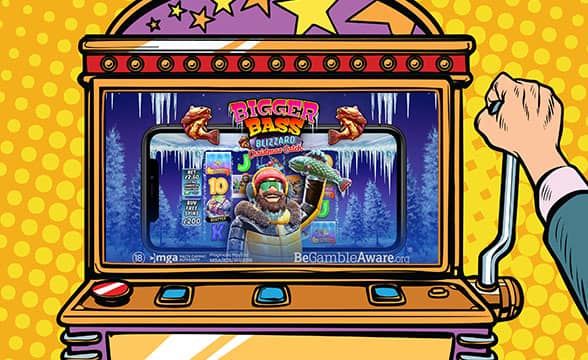 Leading game developer offering player-favorites to the biggest international brands in the industry Pragmatic Play has added a new exciting title to its iconic Big Bass Bonanza series. The provider decided to kickstart the winter season with an early game with a wintery scene in place. The new slot is called Bigger Bazz Blizzards Christmas Catch and it is packed with instant cash prizes, multipliers, and free spins. The game with a 5×4 grid invites players to put on their snowsuits and get their fishing gear ready to embark on a rewarding fishing expedition.

Join in the Angling Sensation

The grid is placed in front of a wintery scene framed by trees covered in snow on each side and massive icicles above the grid, adding a chilly, wintery feel to the action. The upbeat soundtrack is completed by chiming bells resembling jingling bells heard during Christmas while the reels are spinning. When the Free Spins feature is engaged, the audio’s dynamic goes up another notch. The low-paying symbols on the grid are the A-10 Royals cards.

Players will also discover fishing rods, tackle boxes, a snowmobile, fish, and floats. The snowmobile represents the highest-paying symbol. This symbol can pay up to 50x for five matching symbols in just one combination. The slot also features a Wild symbol in the form of the fisherman. The Wild is only present during the Free Spins round and it replaces standard symbols. All fish symbols feature an instant cash prize. The prizes are awarded once the Free Spins round comes into play.

To trigger the Free Spins round, players need a minimum of three scatter symbols. Coming across more than three scatters will bring players as many as 20 free spins. The instant cash prizes are then collected by the fisherman. A minimum of four cash prizes need to be collected in order to move onto the following round, with the possibility to retrigger the free spins and multipliers that grow incrementally.

The studio has an impressive portfolio packed with more than 250 award-winning games known for their excellent mechanics, themes, and rewarding gameplay. Among them, we can mention recently released games like Gems of Serengeti, Snakes & Ladders 2 – Snake Eyes, and Santa’s Great Gifts. The new game is part of the iconic Big Bass franchise which has “always proven to be a go-to game for slot enthusiasts” according to the company’s chief operating officer Irina Cornides. As expected the new slot displays the same “cutting-edge features and thrilling mechanics” of the rest of the games part of the series while carrying the gameplay “to a new level with a revamped winter aesthetic.”

Last month, the studio expanded the Big Bass series with Big Bass Bonanza Keeping It Reel, a slot with up to 20 free spins per spin and a 10,000x maximum win. In November, Pragmatic Play signed a partnership agreement with LiveScore Bet for the Netherlands.